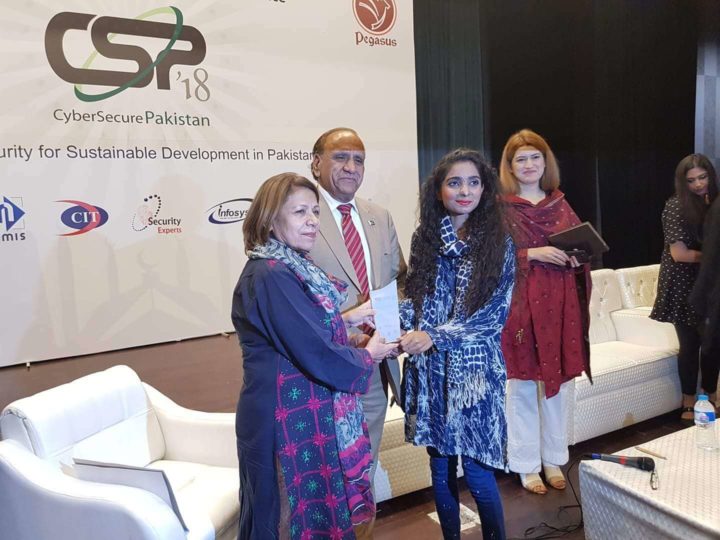 The day came when I had to share the huge stage with other men and women from all over Pakistan. Excited and a bit nervous, I went up as a panelist at a national conference on CyberSecure Pakistan, held in March in Islamabad.

I saw a young girl with beautiful long curly hair sitting at the far end. When she brushed her hair from her face, I saw what I wish no one would ever have to see, let alone live with — a face burned by acid.

The moderator introduced her: “Meet Suman Ali, victim of child sexual abuse, acid attack and a victim of cyber blackmail.”

Suman was there to plea for justice and to warn youths of the dangers of predators. Suman, now 21, told the audience how her own brother-in-law sexually molested her when she was 11, and how he threw acid on her face when she was 18 because she refused to yield to him.

Suman filed a complaint with police, but while the man was out on bail, he tried to blackmail her to withdraw the case by threatening to post on social media explicit (Photoshopped) pictures of her. But Suman did not withdraw, and instead vocally advocated for her cause at every forum to build pressure on the justice system. Ultimately she won: the man is now serving 14 years in prison.

Acid attacks are on the rise in Bangladesh, India and Pakistan, as are cases of child molestation and online blackmail. But the impacts of these attacks are under-reported because of social and cultural barriers. It is even considered taboo to talk about them; the victims and their families prefer to stay quiet.

The Sexual Exploitation of Children in Southeast Asia, which found a correlation between sexual exploitation and the increase in internet use in 11 countries of Southeast Asia. And the website Internet World Stats says 48.7 per cent of the world’s internet users are in Asia. In the digital world of today, nothing remains in isolation; an increased digital footprint means an increased risk for vulnerable victims. With easy access to the internet and cell phones, the chances of children being exploited in different ways have increased. Says the United Nations Children’s Fund (UNICEF): “Potential risks include exposure to disturbing or potentially harmful content such as violent images, cyberbullying, sexual solicitation (‘online grooming’), circulation of child sexual abuse materials and live stream abuse.”

Acid attacks are predominately gender-based in South Asia compared to attacks elsewhere in recent years. In the United Kingdom, for example, most victims have been men and boys involved in street crimes and gang scuffles.

Acid is a weapon of choice because it can be carried in a regular soft drink bottle, no one can trace it back to the perpetrator, and it is easily accessed as every household in Asia uses it to clean kitchens and toilets. Attackers use acid not so much to physically hurt the victims but to make an example out of them – so that girls would never dare to challenge the shackles of the patriarchal society.

The stigma of being “marked and rejected by a male” results in disapproval or pity from the family and the society. Both have an adverse effect. Stories like Suman’s should be shared to commend her bravery, and to encourage parents and youths to debate what is now forbidden from being discussed.

More seriousness from government in legislation and in implementing laws is one solution. In Pakistan, the Acid and Burn Crime Bill 2107 is still pending the upper house’s approval.

However, if the stigma remains, then the laws are only half-successful. I advocate for campaigns like UN Women’s HeForShe, which sensitizes men about women’s rights. We should have repeated media campaigns and public service messages that condemn cyberbullying and acid-throwing, and promote awareness about laws and punishments.

This article was originally published on Saturday, September 29, 2018 at http://asiapacific.unwomen.org/en/news-and-events/in-focus/youth-voice/mahwish-afridi/a-weapon-of-choice

Femonics is an initiative to bridge the gender gap in Pakistan through research, advocacy, capacity building trainings, policy interventions.