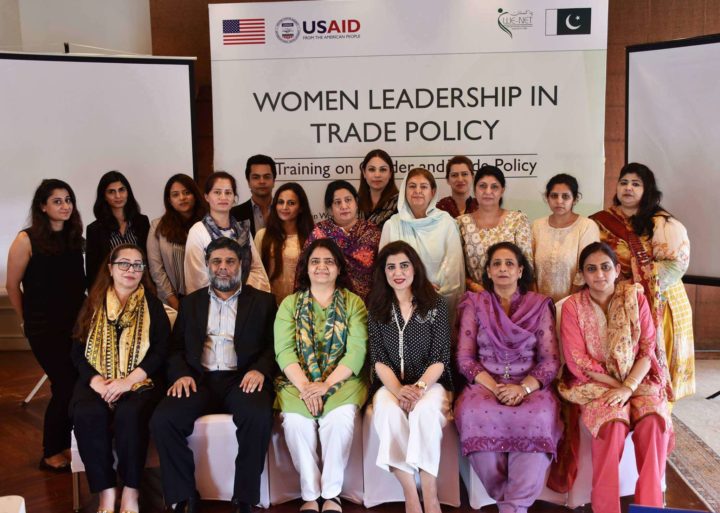 Have we ever analyzed a shadow economy of a developing country like Pakistan through a gender lens? How it affects the women? Being an entrepreneur and a woman I can share first-hand experience how a sudden shift in policies revolving around trade hinders women owned businesses and paves way for the black economy.

The recent surge in the demand of dollar in Pakistan due to various socio-political reasons resulted in an overnight policy shift in the policy of Pakistan. The facility to Pakistani importers to pay 10,000 $ as an advance payment was revoked without any warning to counter the flight of dollars from the foreign reserves. The impact of such policies was explained by Myra Qureshi CEO Conatural at a session ‘Women Leadership in Trade Policy’ which deals in organic skin care products. She had to pay to her Chinese contacts for the bottles, lids and other specific packaging details that one of her International buyer had specifically demanded. Not only did it ruin the image of Pakistani importers when she had to convey this issue to her Chinese people with whom she had placed the order after approval of samples but this  situation also put her company’s credibility at stake. She had to use other means to pay in cash for her legitimate business which was forced to take the route of the black dark end of economy for a decision taken without any consultation with the stakeholders.

The attempt to save the foreign exchange reserves had a reciprocally adverse effect on the already dwindling Exports of Pakistan. Where it affected businessmen in exports it just killed the businesswomen of Pakistan. Unable to pay advance for their orders, no help from families living abroad to pay on their behalf, women lost orders and credibility.

With problems like terrorism, drugs, money laundering, human trafficking, the menace of black economy portrays a very grim picture of Pakistan. If we analyze the areas we’ll find out that women are the most affected. The more a country relies on it the more women are put at risk socially and economically.

In Pakistan, the field of freelancers is emerging very fast. More and more women are adopting this field.  The IT industry has contributed 1 billion $ to the IT Exports of Pakistan in current fiscal year. According to Hisham Sarwar Pakistan ranks 4th in the Freelance market in the world. And when it comes to accepting money for the legitimate hard work, they are pushed to use illegal means and sources because the foreign buyers of their skills prefer to pay through credit cards and PayPal. Both options are a major hurdle in Pakistan.

At an RCCI event, Fintech Conference 2018, the Additional Director of State Bank stated in a panel discussion that the world-renowned system of payments, PayPal could not be welcomed into Pakistan because any entity other than the State Bank of Pakistan that can hold money without being monitored by the Government of Pakistan is considered money laundering.

And this being such a sensitive issue in Pakistan I am skeptical that it might come to Pakistan anytime sooner. Though with Aliexpress, we are expecting Alipay into Pakistan, but again it’s yet to be seen how and with what conditions it may enter the Pakistani Market. This scenario not only fuels the black economy but in the gender analysis reveals that it affects the women more because they are the ones with limited access to opportunities.

Women predominately work in the informal sectors in general trade and businesses and are thus the driving force of the informal economy. Domestically or internationally women tend to stay away from the paperwork, therefore, they deal in the suitcase businesses which are undocumented and unaccounted for. This extra income that they generate can be the difference between living on the margin of poverty line or just above that, therefore, no one can deny its significance. Cross border trade with India, Afghanistan and now China in apparel, jewellery and beauty products is the main source of income for women. However, a new booming trend that has recently emerged is the import of cosmetics, shoes and bags from US and UK to be sold online in Pakistan through social media portals. No one can gauge the scope or contribution of this element since all the dealing of buying and selling is done through informal methods. These aspects of the black economy cannot be strictly curbed, but through awareness and regulations should be brought into the formal sector so that the revenue women generate should be accounted for in the formation of policies of Pakistan.

Tax on the accounts without NTN numbers was another such policy that played a negative role on the economy of Pakistan and rather contributed to the black economy. Without taking people into confidence, it had such a disastrous effect that women stopped using banks for transactions and for saving their earnings.

Another factor that promotes the black economy is in Pakistan is tax evasion. People use different means to launder money abroad and avoid banking channels. Again, this has a different impact on both genders. Business tycoons might be doing that to save millions and billions in taxes however when it comes to the women-owned Micro SMEs and the SMEs when they get the courage to step into formal system they are discouraged by the institutions. Chief Justice Pakistan inquired recently if he could order to seize all the foreign currency accounts. With Panama scandal and mega corruption scandals in Pakistan, women are becoming victims to these policy shifts and regulations.

Personally, I regularly require a foreign currency account to pay for international exhibitions and to receive payments from abroad. I went to two renowned banks, they just avoided and discouraged me to open them. The managers couldn’t believe that I had an NTN and I could fulfill all the formalities to apply for a foreign currency account. One of them rather opened me an account where money could be sent from families living abroad, I was told not to declare my income as business earnings. The result was that I had to switch to Western Union which to my lawyer was illegal for business transactions and I could not mention that revenue in my Tax Returns.

Freezing of foreign currency accounts, by denying payment in foreign currency, forcing people to obtain documents to declare their source of income from their foreign employers is another barrier that is being imposed on the Pakistani businessmen and women. Yet women suffer the most since they are again plunged into a hassle uncalled for by the policy makers of Pakistan.

In a meeting with the DG Trade Policies it was revealed that the National Commission of Women on the Status of Women will regularly analyze the trade policies of Pakistan through a gender lens.

A decision that is the need of the hour so that the environment could be made viable for the economic empowerment of women. The commission should act as a bridge between the formal and informal trade bodies of Pakistan and it should take all the stakeholders on board.

Femonics is an initiative to bridge the gender gap in Pakistan through research, advocacy, capacity building trainings, policy interventions.